This update must of course start with an apology for the lack of posts since November! The greenkeeping team has undergone some major changes of personnel and roles in the past few months. First of all congratulations must go to both Richard Cutler on his new role on the Club's Management team and to Andrew Ricketts, our newly promoted Head Greenkeeper. Richard Le Moignan has also recieved a promotion along with myself to the position of Deputy Head Greenkeeper. With Richards' departure from the main greenkeeping team, he has passed on the updating of this blog to myself, (Matthew Amy) and Andrew. We hope to keep you informed about the ongoing maintenance and improvements at La Moye as diligently as Richard did. Now, I have a lot to cover since the last update so lets get started!

As shown in the last post our major project this winter was the reconstruction of the 1st tee complex. This was completed in preparation for the captains drive in and we hope that the members are happy with the result. The old tee complex had been due for re-leveling for some time and so the opportunity was perfect to also increase teeing space on this short par 3. Members will notice that we have increased the surface area of the men's yellow tee by 50% which allows us to better spread the wear on the surface.
Aesthetically the tee has been much improved by removing the old Elaeagnus hedge which had become aged and bare in places. The banking to the tee has been recreated using pure sand and replanted with Marram Grass (Ammophila). This native dune grass has been collected from other areas of the course and St Ouens sand pit, with the greenkeepers planting an estimated 2-3000 individual sprigs! The Marram Grass has been selected to give golfers an instant impact of the links character of La Moye on the first hole.

Other winter work has included the rebuilding of some of the bunkers. Holes 10, 11, 12 and 18 have all seen renovation to their front left bunkers. The work completed on 11 and 12 saw a more extensive remodeling of the ground around the bunkers, which we believe has created a fairer obstacle for the golfers and made the bunkers look more natural in their positions.

After the completion of our winter program and the beginning of the main golfing season our preparations began for the arrival of the European Seniors Tour for the first time in five years. A program of regular verticutting and 'grooming' of the putting surfaces was put in place to refine the surface and remove the seeds of the Poa annua in the sward. This program is used every year for the benefit of the members and we saw especially good results this season with a prolonged period of dry weather. Two applications of top dressing were applied in the lead up to the tournament to improve surface levels and as part of our ongoing thatch dilution program.
Greens were double cut and ironed every day of the tournament along with cutting the surround, approaches and tees. The greens performed brilliantly during the tournament with speeds beginning at 9.5 on day one and peaking at over 11 on the final round as the sun dried up the surfaces.
Perhaps the most marked improvement this year on the course has been the presentation of the fairways. The golf club invested in two John Deere 8000A Hybrid mowers and they began to pay dividends almost immediately. The fairways were cut regularly in different directions and the improvement in quality of cut from the new units has provided better ball roll and lies. For the tournament itself the fairways were cut every evening and we reverted to a 'block' pattern, which is more in keeping with the traditional links character of the course.
All of the greenstaff worked feverishly for the week before and during the tournament, putting in plenty of overtime to present the course to the highest standards. The comments we gratefully received from the professionals, spectators and members were fantastic and the whole team is very proud of their hard work. 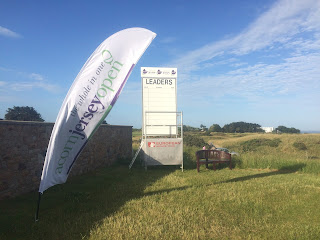 Next on our busy program for 2015 is the Natwest Island Games. Preparations for this tournament have already begun along with our day to day work maintaining the course for our members.